Bolingbrook - Police were called to a Bolingbrook home on August, 16 when a newly adopted pit bull attacked and would not leg go of the pit bull owner's other dog, a puggle.  According to the owner, after playing with her son and Hogan, the puggle, with no warning or provocation, the young female pit bull attacked Hogan and persisted in the attack for at least 10 minutes before police arrived.  Shapiro's 1.5 year old son was a foot away from the attack when it began.

The responding officers asked for permission to shoot the pit bull in order to save Hogan who was by that time blue with severe wounds to his neck and groin.  With permission, an officer shot and killed the pit bull.  The ghastly and dangerous attack and shooting were not reported in the media.

The pit bull, Khaleesi, had been imported to Illinois from Kentucky in late March by Dawn Teeter Nicosia of The Dog House Humane Group in McHenry, IL according to info from facebook pages and petfinder.  Khaleesi lived for several months with a foster named Kristie Hilton in Elgin until Khaleesi was adopted by Shapiro in June. Hilton described Khaleesi as "a gentle soul"  who "has not met a dog or person she doesn't like" and displayed several photos of Khaleesi with other pit bulls in her home on her facebook page.

The owner had several photos of the pit bull with her puggle, and the puggle seemed completely at ease with it;  He never saw it coming. And now he'll never be the same. 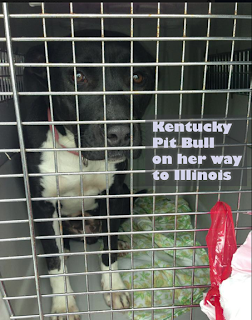 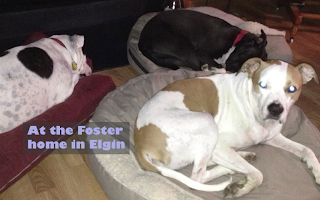 Kaleesi benefits from professional photographs and great write-up on petfinder to get adopted. 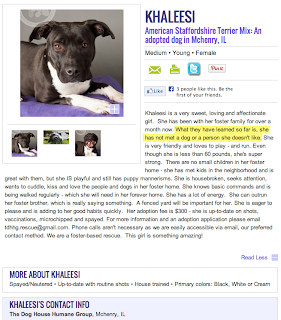 Evidently, Khaleesi the Kentucky pit bull loved people and dogs...so she was adopted to a family with a toddler and an adorable puggle. 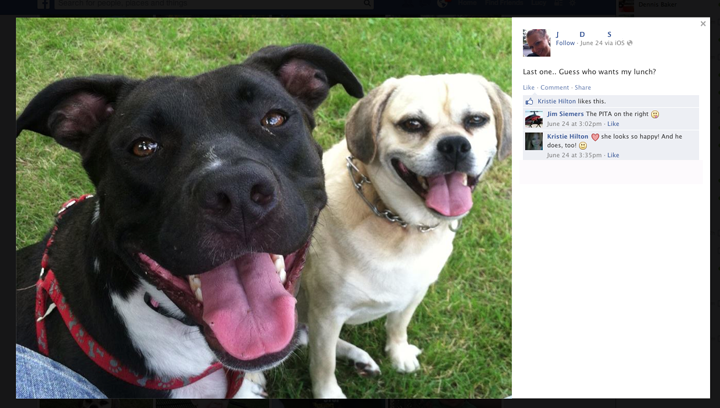 Then the attack happened.

J D S
August 17 via mobile
Long post! Please only read if you want details on Hogan & Khalees's incident. Warning may be graphic and heartbreaking news.
Yesterday was a the most difficult day of my life. I want to share with my friends what happened but I only want to have to explain it once.
Our morning routine was quickly changed. My dog Khalees (or keesy as I called her) went after Hogan (Lewis's Dog). She was not agitated or aggravated and she attacked for no known human reason. It had to be a dog thing because minutes before they were waking up & playing with (her child) before we went outside to potty. So anyway she got ahold of his neck wear he could not defend himself. The tugging & tearing went on for over 10 mins till police arrived. They quickly assessed the dogs & seen Hogan was not going to hold on much longer. His face was blue and both dogs were exhausted. The officer & I then needed to make a choice as what to do. Unfortunately Khalees had to be put down. She was beyond reason, water being thrown on, or prying her off..every time she let go shed just get a bigger hold then she went for his groin and this was sure to kill him in seconds..I had been screaming & crying for about 15 mins by then. Everything is kind of a blur in & out.
Lewis arrived on the scene 3 mins later. He rushed Hogan to the vet because I had (her child) (rather a neighbor did) and I was in no shape to drive from shaking & crying so hard at what just happened. I was so distraught I couldn't think right. It was 7:30am by now..and I had to go see my girl Keesy. I won't give details but from what I seen she didn't have a mark on her except blood on her face from her wound. I cleaned her up while praying for her to find her Heaven and go there & be at peace & play with my doggie Pepe who passed away a few years ago. I'm beside myself for now losing her. So all this while Lewis is at Vet with Hogan who had lost a lot of blood & they had to stop the bleeding asap before Hogan lost too much. I was so worried he'd not make it. He had to have surgery where his neck & leg arteries were. And it was a "process" the vet said as to putting him back together. He has stitches from his head to his jowl & further down his neck. Puncture wounds all over & then a large area of repair down by his groin. The vet was so kind to take 1/2 payment down before treatment & we could pay the remainder when we picked him up later. Today he's back for another visit, and back Monday to remove the three draining tubes put at the sites. He has a way to go to be back our fat lazy ol' Hogan but he should be ok. The vet said she never had a better more determined patient. It's hard to say I'm happy that Hogan is ok when I'm so sad for losing Khalees. But it's the situation our family is left with.
A generous donation to Hogans Vet bill was called into VCA Animal Hospital by Khalees's foster Mom Kristie Hilton.
Also Thank you to Officer Bill Smith for all his help & coming to our house this morning with condolence card for us & a get well card, treats & toy for Hogan.
This tragic day will remain in our memories forever as will my love for Khaleesi.
Life can change so quickly. Love everyone & make them as happy as it were the last day you see them because it happened to me. I was a great doggie Mommy & I know Keesy loves me. I feel her still here with me. I keep looking in the back yard for her. Please keep our family in your prayers.
Thanks for caring enough to read this post.

Hogan will never be the same. 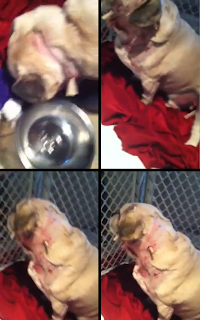 His face may never be symmetrical again, and his leg will never work right. 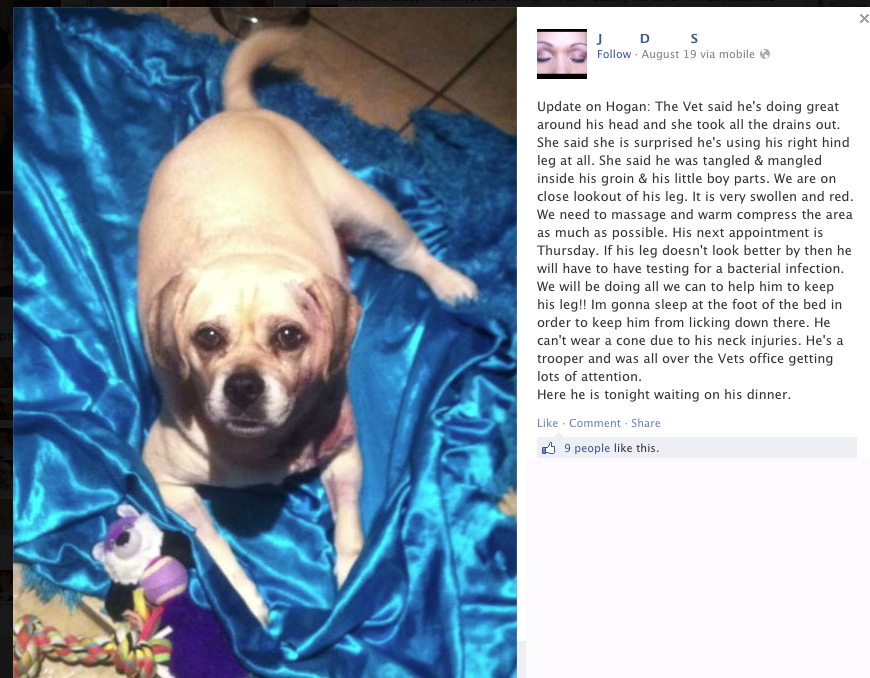 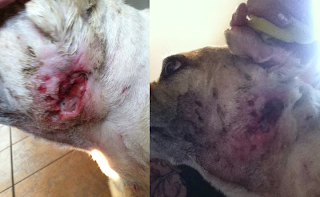 ILLINOIS DOES NOT NEED DANGEROUS DOGS IMPORTED FROM OTHER STATES.

PLEASE REPORT DOG ATTACKS AND SHOOTINGS TO THE MEDIA.  EVERYONE IN LLINOIS NEEDS TO KNOW HOW BAD THIS PROBLEM IS.

Thanks to an anonymous source who happened upon this story on facebook.


Joann has since deleted her post describing the attack from her facebook page. Here are screenshots of it: 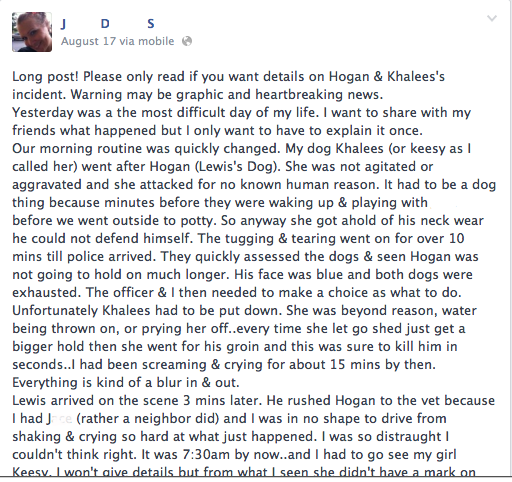 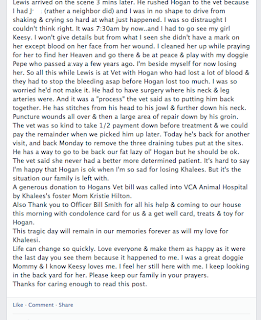 Before they adopted out a mauling pit bull, the Dog House Humane Group participated in promoting pit bulls for Animal Farm Foundation. 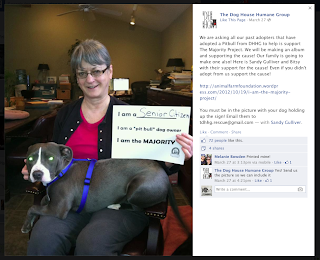