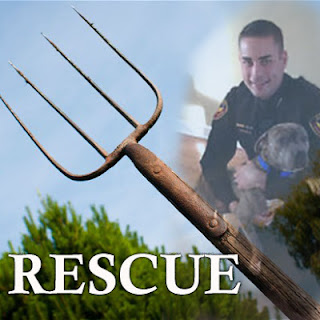 Kendall co - Last February a young Aurora police officer made the news by adopting an aggressive pit bull he first encountered on an aggressive dog call.  Even though the initial report on her was for an aggressive dog, and a veterinarian later deemed her aggressive, Officer Grandchamp saved her from being euthanized and, with the help of Don't Bully My Breed rescue, he adopted the pit the very same day and named her Shield.

At some point, Shield went through "a battery of temperament tests through a Geneva training center…and passed with flying colors."

As you might suspect, pit bull advocates ate this story up and for a while Grandchamp was all over the internet telling people not to judge pit bulls by their looks or moments of aggression if they act lovey dovey in between their aggressive outbursts.

Four months later, on June 15, the pit bull escaped her yard, went to the neighbor's yard and attacked a welsh pony.  The pony's owner drove Shield the pit away using a pitchfork.

A veterinarian came and closed the gaping wounds on the pony. Shield was sent right back home with no quarantine because the pit did not bite a human.  Kendall county animal control is apparently unaware that the quarantine is a guard against the spread of rabies or that horses can get and spread rabies, and not a time out for bad behavior.

Commenters on the updated story included a Megan who might be the Megan from Don't Bully My Breed who suggested that we can't know if the pit bull wasn't just playing or if it went into a play bow before it ripped gaping holes in the pony as if that would matter to anyone but her.  Megan preferred to focus on the use of the pitchfork as a means of protection from the aggressive pit bull even though the pit bull's aggression occurred in a barn and pitchforks are a necessary tool in barns.

This, in fact, is not the first time someone has had to resort to using a pitchfork to protect themselves from a pit bull in Illinois and they killed the pit bull with it.