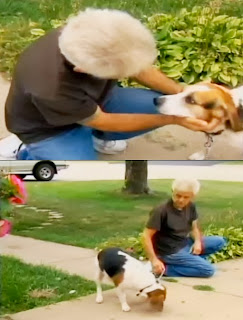 UPDATE - mystateline has posted an update to the story with an interview with the victim beagle owner, Jerry McCollom.  The reporter did not bother to ask McCollom about the terror of being set upon by a pit bull and thinking his dog was going to die.  They published video of McCollom apologizing to the pit bull owner for protecting his pet's life from the pit bull.  mystateline added that the pit bull owner was ineffectually trying to disengage his pit bull from the beagle,  McCollom  said the pit bull was out of control

The update failed to repeat that the Winnebago county sheriff's office believes the beagle's owner's actions were justified and brought no charges against him.

The reporting by mystateline leads with the sorrow of the attacking pit bull's owner and suggests that mystateline might be unhappy the beagle owner was able to protect himself and save his beagle's life.  Mystateline prefers to believe that the pit bull that attacked the beagle was merely "confronting" the beagle.